In the world of display technologies, one of the topics currently on everyone’s mind is high dynamic range, or HDR. There is a lot of misinformation disseminated about HDR, what it is, and what it does. This white paper will begin by defining what HDR really is, and then delve into the key technical elements of HDR and WCG and how it affects what we see on a display.

Sidenote: If you would prefer “just the basics” of HDR and WCG—perhaps you’re a consumer or an integrator who needs to explain, briefly, what these terms mean and how they affect the technology experience—please click over to this post, HDR and WCG: Just the Basics.

What Is High Dynamic Range?
In terms of images – for still cameras, High Dynamic Range (HDR) uses layered photos of the same scene, taken with different exposures. This technique is done in post-processing, or even automatically inside some camera models. It allows a photo to capture what we can see more accurately. However, when dealing with displays, it’s all about improving the range of contrast between the darker and brighter parts of a scene. When presented with compatible content, displays with HDR can produce a wider range from black to white (aka. grayscale), so you can see more details in the very darkest and brightest areas of the picture. You’ll also see highlights, which are moments of brightness that appear on illuminated objects, such as the reflections off a shiny surface like a chrome car bumper. Without HDR, those highlights wouldn’t be any brighter than other bright objects in the scene. HDR displays are indeed overall brighter… but it isn’t just about overall brightness. Fundamentally, HDR is about being able to provide the necessary higher levels of peak brightness when the scene calls for it.

HDR is an end-to-end technology. That means source video needs to be created or captured containing HDR level color and brightness ranges; the distribution method needs to retain all the extra HDR brightness and color information; and the display device must be capable of reading and managing the HDR data and have sufficient brightness and color capabilities to deliver HDR’s picture quality benefits.

Why High Dynamic Range Matters to Viewers
The exciting part of HDR (as an overall concept) is that it takes us to the next level of image fidelity in video source materials, and the enhanced capabilities of the displays that can reproduce what the source material contains. In the process, HDR addresses how to approach what the human eye can actually see.

Standard-dynamic-range video describes images/rendering/video using a conventional gamma curve. Gamma is the relationship of how bright an image is at any input level.  Gamma is a nonlinear operation used to code and decode brightness values in both still and moving imagery. It is used to define how the numerical value of a pixel relates to its actual brightness. The conventional gamma curve was based on the limits of the original cathode ray tube (CRT), which allows for a maximum luminance of 100 cd/m2 or nits. This remains as the reference evaluation of other gamma curves that we will be looking at. 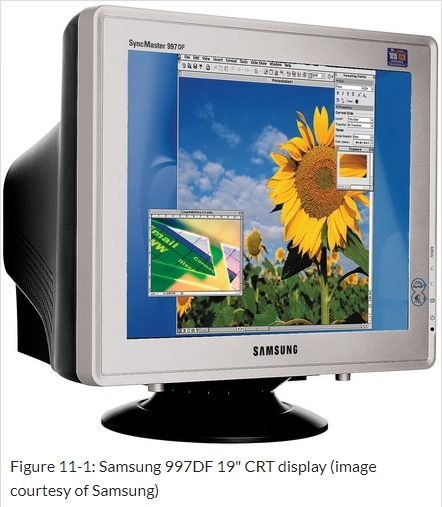 Older CRT technology had a maximum luminance of 100 cd/m2

HDR “Standards”
There are multiple formats in HDR and several video interfaces that support at least one HDR format. We will reference the evolution of HDMI as an example of the most common interface. HDMI 2.0a addressed the first developments in HDR and was released on April 8, 2015. In December 2016, HDMI announced that Hybrid Log-Gamma (HLG) support had been added to the HDMI 2.0b standard. HDMI 2.1 was officially announced in January of 2017 and added support for Dynamic HDR which is the inclusion of dynamic metadata that allows for changes on a scene-by-scene or frame-by-frame basis.

Wide Color Gamut: What You Need To Know
In concert with HDR increased range of luminance, wide color gamut is the introduction of an increased color space. This provides a much larger palette of color so to work with. It more closely replicates what the human eye can see. 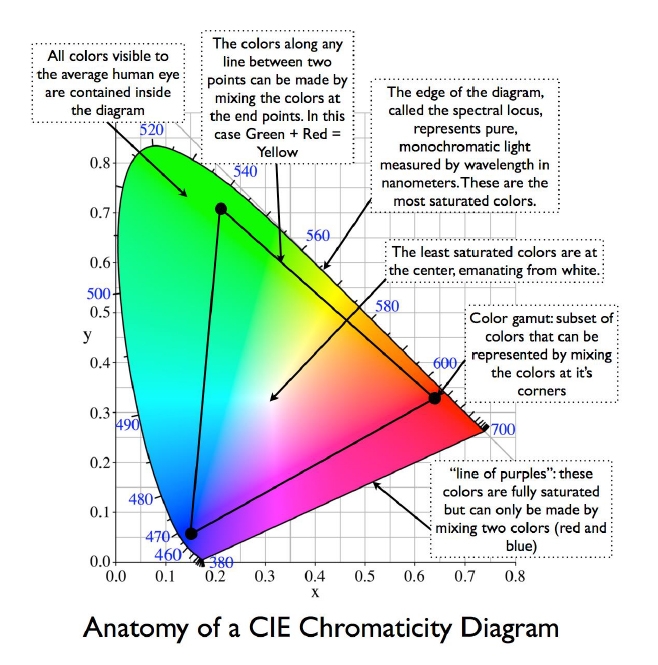 All imaging-based applications need a specific, well-defined color gamut to accurately reproduce the colors in the image content. Over the years this has given rise to many different standard color gamuts for the current image content, and they have generally been based on what the currently existing displays at the time could produce. Both the displays and content have evolved together over time, and many distinct color gamuts have been defined, but they are not all created equal.

What makes a color gamut an industry standard is the existence of a significant amount of content created specifically for that gamut. This necessitates manufacturers to include that standard in their products. Content creators and the content they produce defines a true color gamut standard. It is then up to the display to deliver it as accurately as possible on-screen.

Viewers tend to think of color gamuts in terms of their most saturated colors, but according to Dr. Soneira, the greatest percentage of content is found in the “interior regions of the gamut, so it is particularly important that all of the interior less saturated colors within the gamut be accurately reproduced.”

Since the introduction of HDTV and the expansion of internet content, the sRGB / Rec. 709 color gamut standard has been used for producing virtually all content for television, the internet, and digital photography. Since the source material is created based on these standards, if you wanted to see accurate colors as they were created and intended, then the display needed to match the sRGB / Rec.709 standard color gamut. If the display inaccurately replicates the gamut used as the standard, either larger and or smaller, the colors will then appear either over or under-saturated.

Today a display will be evaluated in terms of color reproduction as a percentage of the amount of sRGB/Rec.709 or as we embark upon the future, Rec. 2020 that they produce. Rec. 709 is the international recognized standard video color space for HDTV, with a gamut almost identical to sRGB.

For broadcast it is defined in 8-bit depth, where black is level 16, and white is level 235. 10-bit systems are common in post-production, as typically the source from camera is of a much wider gamut and bit depth than Rec. 709.

DCI-P3 is a wide gamut video color space introduced by SMPTE (Society of Motion Picture and Television Engineers) for digital cinema projection. It is designed to closely match the full gamut of color motion picture film. It is not a consumer standard and is only used for content destined for digital theatrical projection. Few monitors can display the full DCI gamut, but DCI spec projectors can.

When a display needs to support one or more additional color gamuts like sRGB / Rec. 709 that are smaller than its native color gamut, that can be accomplished with digital color management performed by the firmware, CPU, or GPU for the display. The digital RGB values for each pixel in an image being displayed are first mathematically transformed so they colorimetrically move to the appropriate lower saturation colors closer to the white point. The available color gamuts can either be selected manually by the user, or automatically switched if the content being displayed has an internal tag that specifies its native color gamut, and that tag is recognized by the display’s firmware.

Sorting Out the HDR Standards – Where Are We Today?
HDR10 has established itself as the basic and most widespread HDR standard. It masters content at 1,000 nits. The limitations of HDR10 is the static or fixed metadata. Therefore, if the movie is quite bright or dark it must be encoded as such and this affects the overall image. While a vast improvement over SDR, this has left room for more premium HDR standard options.

Dolby Vision is leading the way as the enhanced quality version of HDR that can also play back the HDR10 standard. It masters content at 4,000 nits with the upside in the future being 10,000 nits. The major advantage that Dolby Vision has over HDR10 is Dynamic Metadata which is the ability to vary the brightness levels on a scene by scene or even frame by frame basis. It also has the advantage of being based on a 12-bit color processor.

HDR10+ seeks to close the gap on Dolby Vision by adding Dynamic Metadata capability to the more basic HDR10 standard. HDR10 and HDR10+, on the other hand, have a big advantage over Dolby Vision because they are open standards that display manufacturers can use for free, whereas using Dolby Vision requires royalties to be paid.

Hybrid Log Gamma may well become a significant broadcast HDR standard begging the question as to whether or not we need another HDR standard. To show something in HDR, your display needs to know how to display the signal. Other standards use metadata to tell how to display colors and assign brightness parameters. The problem is that older TVs and ones that don’t support HDR don’t see or know what to do with this metadata.

HLG takes a different approach. Instead of starting with an HDR signal, it begins with a standard dynamic range (SDR) signal that any TV can use. The extra information for HDR rendering is added on, so an HDR TV that knows to look for this information can use it to display a broader range of colors and wider range of brightness. Early on, the BBC and NHK decided against using a metadata-based approach, since metadata could be lost, or in the case of Dolby Vision, which uses a more complicated approach, out of sync with the image on screen, causing colors to display incorrectly. The ability to display on any TV — theoretically even your old non-HD TV — is another bonus for broadcast.

These varying standards all relate to HDR in one form or another. Some displays only address one standard while others address multiple standards. It is impossible to pick an eventual “winner” under a single standard. There are too many variables to consider including the cost of acquisition, bandwidth, cross compatibility, and licensing to name a few. Ultimately it is the ability to address multiple standards and even provide proprietary advances in display performance beyond those standards that makes the difference we will see.