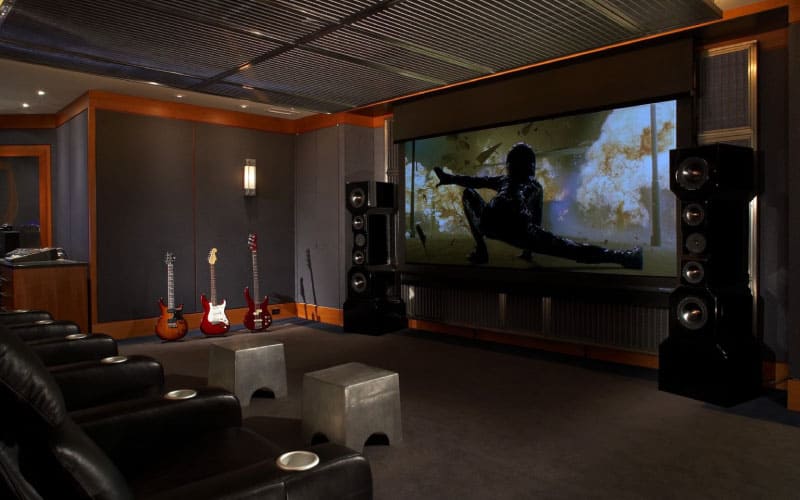 Steve Haas, CEO and principal consultant of SH Acoustics, sees acoustical design as enhancing not only home theaters, but also the health of all occupants.

Acoustics play an important role in many different environments — offices, retail establishments, restaurants, concert halls, home cinemas — and spaces throughout the entire home can all benefit from proper acoustical engineering. Without it, everything from productivity and intelligibility to a good night’s sleep can be adversely affected. Just ask Steve Haas, CEO and principal consultant of SH Acoustics, an acoustical design and engineering firm headquartered in Milford, CN. Having practiced the art and science of acoustics for more than three decades, he’s developed an innate sense of how spaces should sound in all sorts of surroundings.

Like many technologies that inch their way from commercial settings into residential spaces, so did the practice of acoustical design and engineering for Haas. “During college I participated in an independent study program where one of my projects was designing and engineering the acoustics for a recording studio on campus,” he relates. With that experience under his belt, after graduation Haas landed a job with a commercial firm that focused on acoustic design for concert halls, Broadway theaters, houses of worship, lecture halls, museums, and other large venues. “It didn’t take long, however, for the residential world to find me,” he says, as commercial clients started asking him to add acoustical treatments to their home theaters. The transition from commercial to residential was smooth that Haas launched his own business, SH Acoustics, fulltime in early 2003.

Home theaters and other “performance spaces,” like listening rooms and home-based recording studios, may be the most likely candidates for an acoustic overhaul, and continue to comprise a majority of SH Acoustics’ residential business, but Haas makes a point to explore other rooms of a home during his acoustical analysis.

Haas recalls a prior customer who mentioned an extreme sensitivity to noise while he was working on the family’s home theater. “We discovered that the home had 37 individual air-cooling units, each with a special filtering mechanism to mitigate allergens. When those units activated, the noise level was incredible. We were able to apply our knowledge working with large HVAC systems in the commercial world and adapt it for use in this home, ultimately creating a home environment that was significantly more serene for the entire family, no matter if they were in the home theater, the bedroom, the kitchen, or anywhere else. Large homes can easily be affected by excessive noise, lack of sound privacy, and an abundance of sound propagation, so we believe the entire home should be considered as part of an acoustical upgrade to the overall architectural design.”

Haas notes that noise control through acoustics shouldn’t end at a home’s HVAC unit, however. “Traffic, kids playing, gym equipment, a nearby playground, and a host of other conditions can all have an impact,” Haas says. And research confirms this: According to a 2018 study published by the International Journal of Cardiology, German researchers found that people who reported being annoyed by sounds such as the rumble of a car, construction vehicle engines, and horns in their neighborhood had a higher risk of atrial fibrillation — an irregular heartbeat that can lead to blood clots and stroke.

“Spaces that have been engineered and designed with the proper acoustics can make a huge difference in people’s daily lives and improve their health and wellness,” Haas suggests. A bedroom immune to noise generated from traffic on a nearby highway, for example, promotes a better night’s sleep. Productivity soars in a home office when noise from an adjacent home gym doesn’t interfere. Add this to the fact that people are spending more time than ever at home — working, exercising, and escaping the rigors of the outside world — and whole-home noise mitigation through acoustical design and engineering has become a bigger part of SH Acoustics business. “It’s something that shouldn’t be ignored,” Haas says. “Everyone wants a healthier home, and it’s our goal to create the peaceful, serene environment that people crave.”